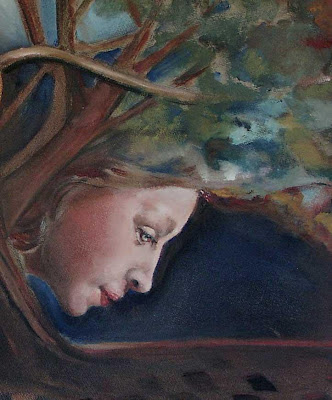 A partial glimpse of a larger work in progress. Oil on canvas.
© Copyright by KA Collins.
To begin your collection of original works of art by Artist K.A. Collins, visit the artist’s website for more information at ArtistKACollins.net. For smaller samplings, simply click over to K.A.’s Etsy Studio.
Any illusions that the American people tried to hold on to in 2011 appear to have been profoundly shattered. Can we really trust the powers that be to better navigate our sinking ship in 2012? ‘In The Rear View Mirror’ March 31, 2009 posting "The American Myth”.
Posted by In The Rear View Mirror at 8:14 AM