We weren’t really sure if the Moon was in the seventh house, or if Jupiter was aligned with Mars when the Sun transitioned into Aquarius in January, but what we do know is that a new age began with surprisingly little fanfare and very few outcries from an indignant American public.
Perhaps that’s because there was little the people could do about the decision made behind those closed Supreme Court doors where our nine Justices sequestered themselves away from prying eyes and inquiring human minds. The four judicial voices of dissent who did speak out with some sort of conscience were simply not enough, for ultimately the majority overruled. And the highest court in the land has spoken, with no room for debate.
This unappealable overruling has, for all intents and purposes, removed the constitutional distinction that once separated the human being (previously considered the citizenry and heartbeat of America) from the inorganic corporate entity.
Of course, our Chief Justice was quick to smooth it all over with First Amendment and freedom of speech references by way of attempt to defend the court’s prejudiced activism in deciding to decide on something it wasn’t necessarily even asked to decide on.
Jubilance justifiably overflows for every large corporation of American birth that strategically envisions this landmark ruling to be their special interest way of leveling the playing field, and it isn’t hard to guess whose playing field will be leveled.
So now that the days of hiding behind the corporate veil are over, the big guns can openly come out of the closet with their stockpiles while mobilizing a coordinated invasion of the 2012 presidential elections … and just in time for the Mayan calendar to end. Frankly, we were rendered speechless when we began to envision the impending 2012 electoral process, and just how the American road to rulership might be navigated and capitalized.
We have every reason to believe that the campaign trail will begin predictably with the usual mannerisms: a welcoming gesture of open arms extending toward empty, upturned palms looking to be filled. Few will be shocked when the Party of No begins to briskly change its song to “Yes!Yes!Yes!” with the fevered pitch that only unfettered corporate financing can inspire. The GOP won’t be singing alone, however, for in this joint fund-raising venture, true bipartisanship will prevail like never before.
As the clock starts to wind down on whatever remains of Mother Maverick’s 15 minutes, the GOP will bloat with confidence as it swiftly moves to back a new heavyweight candidate guaranteed to sweep every primary, win the election by a landslide, and then move the Oval Office to the winner’s corporate headquarters in Arkansas.
Decades of successful corporate branding has already placed the familiar name of our next president, “Wally Mart, Inc.” firmly upon the lips of the American population. And Wally Mart, Inc. will deeply touch the hearts of America even further with its sentimental, oldie but goodie campaign slogan: “Uncle Sam Wants You!” 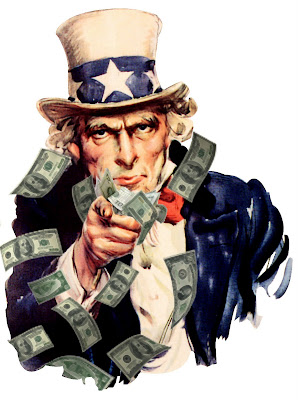 Since Wally Mart, Inc. currently has long standing co-dependent economic arrangements with China, it will logically super-size its campaign platform with class-defining promises of privatizing profits so its corporate comrades can grow richer, and socializing risk so all of the financial burdens can be carried on the hard working backs of the American people. This agenda will not only clear the way to economize by centralizing distribution, it'll create thousands of low paying American jobs, and the masses will be kept so busy producing cheap goods and knock offs that they won’t have time to think about anything other than survival.
Easily locating Wally Mart, Inc.’s corporate charter from 1962 will not only substantiate its American birth, but prove beyond question that the corporation exceeds the Constitutional 35-year age minimum. In the rear view mirror we can see the country being seduced by convincing election commercials romanticizing Wally Mart, Inc.’s humble mid-western beginnings while selling kitsch back in the 1950’s.
As the first corporation to be elected President of the United States (POTUS), Wally Mart, Inc. proudly displays its “Inc.” designation as if it were a PhD. Upon inauguration, Wally Mart, Inc. will undoubtedly take suffragistic steps to grant all corporations the right to vote, whilst proceeding to fill every seat in the House and Senate with corporate America, thereby cutting out the middle man.
It appears the scales of American justice have been unequivocally tipped in favor of the supreme corporation with deep pockets. What's next? Robots take over the world?
Start your own corporation with a marriage license. Say “I do” with our ‘Vice Versa Verses’ December 8, 2009 posting "Wedded Biz”.
Posted by In The Rear View Mirror at 6:52 PM No comments:

Wishing you a rainbow
For sunlight after showers—
Miles and miles of Irish smiles
For golden happy hours—
Shamrocks at your doorway
For luck and laughter too,
And a host of friends that never ends
Each day your whole life through! 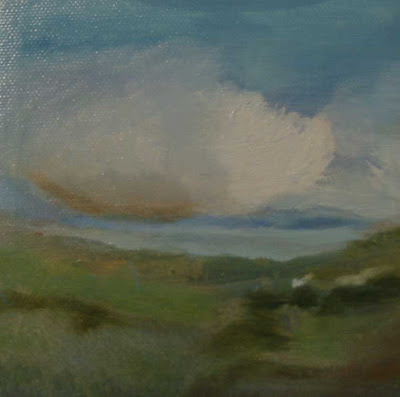 “Ring of Kerry”. Original oil (5” x 5”).
© Copyright by Artist, KA Collins. To purchase this 'mini', simply visit the artist’s Etsy studio at: http://www.etsy.com/shop/KAStudio. ("Author Links")
Beauty is in the eye of the beholder. See for yourself in our ‘In The Rear View Mirror’ December 31, 2009 posting "Avastic New Year".
Posted by In The Rear View Mirror at 8:28 AM 1 comment:

We had a dream……and in that dream we saw Greed standing alone in front of the panoramic window of his imperial penthouse suite perched near the top of The Palm Hotel-Atlantis in Dubai. He gazed out at the glistening Persian Gulf with disconsolation, and tried to shake off the gnawing irritation he felt at the fact that the only palm frond island he could see from his luxurious living room was the Palm Jumeirah.
As Greed stood there, fully saturated in his entitlements, he firmly believed with good reason that only one of anything would simply never be enough. His insatiable heart demanded that he have it all.
And Wall Street was a man after his own heart. Wall Street knew that one of the fastest ways to win the heart of Greed was to bundle up a few derivatives in a red bow, and have them laid on his pillow every evening when his king-sized bed was turned down by the personal maid who never forgot to put that quintessential chocolate crème de menthe on top.
Wall Street owed Greed in a big way for several very banner years, and Wall Street didn’t disappoint when it heartily comped Greed’s recent holiday junket which included an epicurean Celebrity cruise from his doorstep in Dubai to the Cayman Islands for a little tax free R & R.
Our dream followed Greed to the marina where he boarded a cruise ship that looked to be worthy of him, for it was the biggest and best on the Gulf. Few ships sailing the high seas were elite enough to fly the badge of the Red Shield from its flagpole, and the “Black Pearl” was a flagship indeed.
Every level on the ship prominently housed no less than four ATM cash machines, each boldly sponsored by the Big Four banking buddies whose direct lines were stored on Greed’s cell phone speed-dial. He was heartened to see the ATMs on board ship for little could boost the bankers’ bottom line faster than weeks of hefty international cash advance fees assessed upon a full boat of high end cruisers. No doubt a Big Four bank-sponsored Greed-junket was long overdue.
As in life, so in love…..er, lust..... and never to settle for just one of anything, his evenings were filled with gluttonous options; and since Greed was on holiday, he let his southern head do some of the heavy thinking after sundown. At least until the warm currents of the Indian Ocean carried the ship around the Horn of Africa and into the greedy clutches of the Somalian pirates. 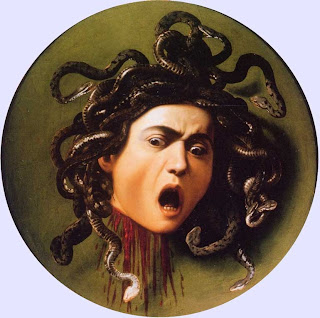 Well, that Red Shield luxury liner may’ve been too rich for the pirates to pass up, but by the time Greed finished dissecting their bottom line calculations and made it known that his cut wasn’t big enough, the pirates couldn’t release his ship fast enough. It seems the only real difference that exists between Greed and the Somali pirates is that Greed doesn’t bother to take hostages. Yet his tentacles are far reaching and equal opportunity abounds.
And then we woke up and wondered if Bernie (see definition below) ever dreamed about outliving his wife Ruth and making Greed the sole beneficiary in his will.

So when Greed comes knocking on your door looking for more, will he be turned away in earnest or will he receive the red carpet treatment he expects?
As the masses move to survive, the Greedy secretly move their assets. Follow the money in our ‘In The Rear View Mirror’ April 13, 2009 posting "Greed Goes Underground”.
Posted by In The Rear View Mirror at 6:05 PM No comments: