The Art of Reality (DS)

We had a dream......and in that dream we found ourselves strolling through the surreal terrain of Dutch renaissance painter H. Bosch in “The Garden of Earthly Delights”, and felt as though we were immersed in a modern reality feature film that only Tim Burton could direct. 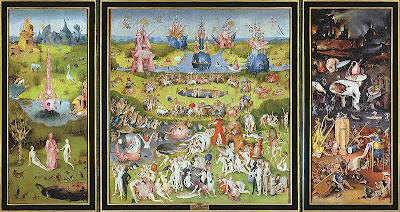 Our voyage through this intoxicating dreamscape plunged us without thought of consequence deep into a world of art imitating life imitating art. To a place where we were incapable of separating fact from fantasy, for the reality is that there was no difference.

And like every true pageant of the masters where a two dimensional painting is brought to real life, we watched like voyeurs as the indulgent derangement of earthly pleasures before us morphed into a third panel reality war zone.

The reality wars being waged within our dream were inescapably dominated by the Balloon Boy posse and the D.C. No R.S.V.P. party crashers. We were rendered speechless as both competitors deliberately left in their wake a smoldering third scene battlefield fully decimated by outrageous exploits – all dramatically delivered with the flamboyance required of a successful reality show audition. A couple sets of felonious fingerprints were left behind in the scorched earth as well, with perhaps a couple more to follow.

Apparently in the real world, the end is meant to justify the means. This ostensibly translates for many to mean no rules, no boundaries, no limitations, no dignity and usually no talent. So when we see that big reality bull burst into a stampede through the china closet of innocent bystanders and carelessly shatter lives and livelihoods while screaming “me, me, me!”, we’ve bizarrely come to accept that even bad publicity is still publicity.

Well, psychology 101 has long asserted that negative attention is better than no attention at all. Yet to repetitively reward the bad behavior of attention grabbers with the media attention they're aggressively hungering for has not only helped create a ravenous monster always starving for attention, but has unquestionably sustained it.

As narcissism continues its incessant me-parade across our high definition screens, and Pavlovian conditioning reinforces the belief that anything and everything goes in the insatiable quest for notoriety, we can only wonder when going too far will just be going too far.
And then we woke up and realized that Bosch’s vivid, yet surprisingly realistic, illustration of life’s temptations and the human condition has lost no relevance with the passing of time and civilizations. Can we reasonably expect the master’s real life garden of earthly delights to remain as relevant in the coming centuries as it is today?

15 minutes: too long for reality show media mongers, too short for the truly talented. Spend 15 more minutes reading all about it in our ‘In The Rear View Mirror’ May 12, 2009 posting "The Boyling Point".
http://www.intherearviewmirror.com/
Posted by In The Rear View Mirror at 1:30 PM No comments:

Facebook was the tactical wall from which the contagious propaganda was hawked and sneezed into the atmosphere, and Twitter kept the infectious buzz spreading like the H1N1 virus in real time. It only took four months of gimmicky posts and tweets to prime every true American for the debut of a new grassroots animated reality show aptly named “Back Asswards”.

The leading “Voice of No” who chimes with the times with one finger on the pulse of ordinary American folks everywhere has made us believe she’s found her calling. And in her role as the new flag waving “Fresh Breeze of Toon Town”, there’s little doubt the year 2012 will yield much more than merely the climactic end of the Mayan calendar.

Speculation has predictably swirled around whether or not her future will include a run for the 2012 GOP Presidential nomination, especially after Mrs. Quit dubiously resigned her Alaskan governorship in July. Considering what the GOP has to pick from these days; however, it looks as if the answer to the speculations would be a resounding, “You betcha!”

Nothing screams “I can lead America” louder than a tell-all, fact flawed autobiography without an index.

When right went wrong was when we realized that this all knowing hockey mom was in desperate need of some common sense solutions if she really wants to win the next big race, and her campaign handlers must be fully capable of finishing up all that she starts but only gets half way through.

Fellow conservative, Elizabeth Hasselbeck, would undoubtedly be an excellent choice for the role of campaign press secretary. Not only would it be refreshing for her to work with another beautiful woman whose views are just as black and white with no shades of gray, but here was a seasoned media personality who could offer some common sense solutions for reconnecting with the liberal media outlets that were unfriended by the “Rogue Gone Social Networker”.

Another common sense solution to her challenges with the press might include recruiting Tina Fey to act as a stand-in for all press conferences and interviews. That way she could personally bypass all of those perky news anchors asking all of those annoying questions. Of course, in order to keep it real, she’d need to continue writing and delivering her own entertaining off message, wandering, around the bend speeches going nowhere, chock full of clichés, one-liner sound bites, new Hillbilly vocabulary words, and folks appeal.

Then there’s Levi Johnston (aka Ricky Hollywood and Bristol’s baby daddy). We don't expect he'll be going away any time soon, especially since he's considered part of the family. Just because he’s a high school drop out, doesn’t mean he’s stupid, for he apparently proved himself to be a quick study in American capitalism during his time behind the scenes on the last campaign trail. One conservative common sense solution to reigning in this morally lost young man would be to bring on board another former beauty queen, Carrie Prejean, to act as Levi’s moral compass. And if we’re lucky, maybe Prejean’s own drama will overshadow Levi’s limelight.

We found our eyes glazing over as we glanced in the rear view mirror while listening to “Mother Maverick” on the radio during her interview with Rush Limbaugh. When the right-right twins finished discussing her new substantive book on policy, we were left scratching our heads yet hungering for more.

While fact checking doesn’t seem to be at the top of the list for either Palin or Limbaugh, deep dark secrets are. So when the GOP GILF starts down the 2012 campaign trail where every skeleton hiding in the closet will become a headline, we’ll be standing by, waiting for something truly sensational, like Sarah Palin is really the illegitimate sister of Rush Limbaugh.

As for the lazy media, the beauty queen “Bering to set the record Strait” is as irresistible as fast food. She serves it up fast and easy like a drive thru window, and few are the professionals who take the time to research what they're eating before regurgitating it out for worldly consumption. And not unlike a fast food meal which deceives us into believing our bellies are full, we’re essentially left starving for true nourishment and bloated with gas barely an hour later.

Love it or hate it, no presidential campaign has ever been won without support from the media, and no exceptions for going rogue or being mavericky either. Perhaps inviting Hillary over for a cup of coffee will help to clean up her relationship with the press in time for season two of “Back Asswards - Kissing Babies”. Even pit bulls wearing lipstick still have to twist and contort in order to lick themselves clean.
But what we really want to know is do we all have to watch?

Hungry anticipation,
Rough tongue on lips smack,
Never, ever expecting
To give anything back.
Self centered and serving,
Entitled to a fault,
Forget about foreplay,
The senses assault.
Emotionally lazy,
E’er beguiling tender prey,
Purring “It’s all about me”,
“Get your needs out of my way”.

Not a priority,
But convenient after thought.
Beckons at midnight
For an honored one sided talk.
Privileged and blessed,
Nay, holier than thou,
“MAU Me Me MAU”,
Drawls the elitist meow.
Inhaling obsidian air
As cigar fumes float on the waft,
Far too important
To call a common cat back.
Ambiguous, yet
So biased bent,
Overflowing with bitterness,
Even divine discontent.
No one dares ask
Zeitgeist Alley Cat,
Wherever on earth
Might it be at.

What's the difference between Casanova and an Alley Cat? Open book answers to this test question can be found in our ‘Dream Sequence’ October 17, 2009 posting "Casanova Works The Strip".

Posted by In The Rear View Mirror at 12:32 PM No comments: