Which View Is Witch? (DS)

We had a dream……and in that dream we found ourselves stepping over a troll bridge into the enchanted woods of Winterthur with nothing but the moon to light our way. The forbidden faerie ring to our right was veiled in a thick midnight mist, and slipped by unnoticed as the spirits of the woods urged us forward along a serpentine pathway.
It was the eerie sound of chanting, emanating from deep in the mist, that stopped us dead in our tracks.

Our dream then took a sharp right, off the beaten path, in the direction of the faerie ring where a yellow light was faintly glowing through the heavy haze. We sucked in our breath when we eventually caught sight of the chantress, and then we quietly crouched, hiding in the shadows of a mushroom to witness with morbid fascination her clandestine mid-term ritual.

While it should’ve come as no surprise for us to witness the magick making of tine O’Donnell since she'd undoubtedly managed to cast a spell over the people of , it's just that we never really expected to catch her in the act in the woods. 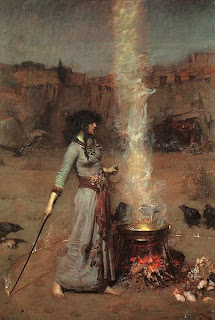 Well God works in mysterious ways and tine truly believed she could secretly help Him help her win that seat in the Senate. And it sure helped that no one had ever officially mandated there be any separation between church and state. It also helped that she was a member of the FOXy Palin coven. This gave her the benefit of a direct line to the spirit of Ronald Reagan, and if an astrological roadmap could help him successfully navigate a presidency, then the Book of Shadows could certainly help her sideline all of the challengers and critics she'd encountered on the way to Washington.

In a rare "Ah-Ha!" moment, Christine realized the best way to render her detractors impotent would be to simply change their point of view.

On an altar dripping in blue hen’s blood, laid O’Donnell’s opened spell book, brilliantly lit by an arc of five blazing black candles. Next to the altar stood tine, glistening with sweat in a red business suit, busily working her magick while stirring the bubbling cauldron before her with focused intent. Her spellbinding witches' brew appeared to be a simmering mixture of rich milk, sweet goldenrod, peach blossoms and holly berries, potently finished off with a transformational pinch of DuPont chemicals. The heat from the fire beneath the pot was so intense that it even reached out to sear us in the shadows.

Like the five points on a pentagram, we watched as Christine O’Donnell commanded the spirits of her naysayers to spend one episode inside the bodies of the five women of “The View”.

Dick Cheney got to feel with heavy dreads the caring heartbeat of Whoopi Goldberg.

Bill O’Reilly got to watch his pinhead explode through the patriotic eyes of Joy Behar.

Karl Rove got to learn how to skillfully navigate America’s crossroads with dignity through the filtered lens of Barbara Walters.

Mike Castle got to taste the bitterness of defeat on the gracious tongue of Sherri Shepard.

Eric Cantor got to shoot off his young gun while trying not to repeat the mistakes of the past as he admired a body that reminded him of his feminine side, and obviously, Elizabeth Hasselbeck.

Their special guest that day was Alec Baldwin who happened to know the five ladies of “The View” well enough to recognize when they weren’t themselves. And when Mike Castle in Sherri’s voice asked Alec to define what it meant to be unmanly, Alec quipped with annoyance that this was not a bake off and suggested that Mike go get his man-pants on. As Alec stormed off the set, stage left, he snidely told the others in passing to man-up.

And then we woke up and realized that anyone raised by Bozo the Clown has some pretty big shoes to fill; and just because one acts like a clown, doesn’t necessarily mean they don't have the instincts of a fox.

Have we too just been given a new view of extremism?

We had a dream……and in that dream we found ourselves struggling alongside a working class crew trying to regain control of a schooner bounty that had initially been charted for Atlantic City, but was instead violently blown off course, rudder snapping in a lurch. We heard the tattered sails shutter with purpose as the hull heaved and bobbed directionless through ravenous waters that grew more dangerous with each billowing swell.
No one saw it coming. Or at least that’s what they all said. It was as if the atmosphere had turned on a dime, right about the time the East Wind began squalling with subversion. One minute we were coasting through prosperous trade routes on confident sails bloated with warm sea breezes, not a storm cloud in sight; and the next saw our ship taking on water so fast that sinking appeared inevitable.

As we scurried to bail out the water one bucket at a time, we never even noticed the growing wall of water that was mobilizing to put us in our place. And when that financial tsunami finally got our full attention was when it capsized our boat without remorse somewhere in the middle of the Devil's Triangle, where it dumped us unceremoniously into a very rough sea without so much as a safety net.

We managed to keep our heads above water just long enough to see a monstrous whale the size of circle and descend with rapacious jaws intent upon swallowing us up.

Our dream then dropped us deep within the belly of the whale where we could hear the reverberating voices of those trapped around us long before we could actually see them. 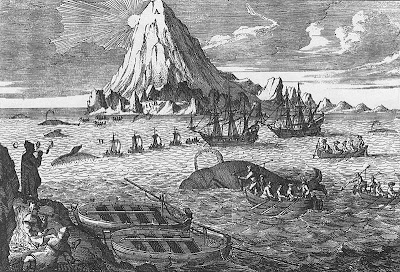 From the surrounding conversation, we soon learned that the whale had a name, ¥uaning More, although the group regularly referred to it as simply ‘MORE’.

The more we listened, the more we understood how much MORE prided itself on being the hardest working predator in the sea. It thrived on the chaos that comes from war and ruin, and there was no time for rest because voracious accumulation is a 24/7 enterprise. MORE was cleverly adroit at tickling desperate ears with politeness and dangled promises, a master in the fine art of bait and switch, and not above making thy neighbor beg. Apparently MORE honored only one golden rule: “he who has the gold, makes the rules”, so consequently refused to play by anyone’s rules but its own.

When our eyes finally adjusted to the darkness that held us hostage, we became better acquainted with our fellow captives, including a few Pleasure .

Wall Street GetOver
This GetOver could do little more than boast about being the original woodcarver, when in fact he was the rainmaker who brought on the storm.
Pinocchio
Pinocchio had always dreamed of having a life with no strings, and MORE had slyly seduced him into thinking he could have his cadmium and eat it too. Well someone once said that Pinocchio was Italian for a reason, and this Pinocchio had absolutely no intention of ever being made in for he had a plan. A strategy designed to beat MORE at its own game. Pinocchio figured that the more he lied, the longer his nose would get, until eventually its length would allow him to pry open the jaws of MORE just enough to slip away relatively unscathed.
Caracas Cricket
No matter how hard he tried to stop the incessant chirping, Caracas Cricket just couldn’t keep his knees from rubbing everyone the wrong way. He spent most of his chirping hours looking up through MORE’s blowhole into the night sky as he wished upon the stars for higher oil prices and for someone to rub just a little bit of that oil between his knees.
StromRuski
Someone has to pull the strings behind the biggest show on Earth and StromRuski believed himself to be the perfect puppet master.
Goodluck Jonah and his simpleton sidekick GideGaddafi
Goodluck Jonah may have gotten his start as Honest John but he realized pretty early on that honesty wasn’t what put him on the winning side, it was self-made luck. And GideGaddafi was a blustering windbag who'd shown himself to be an agreeable feline comrade because he was agile enough to blow in the direction of any winning wind and still land on his feet.
AhmadineDonkey

Had it not been for that obnoxious braying which never seemed to stop, we probably wouldn’t have even noticed AhmadineDonkey sulking off on the side alone. Someone lurking behind MORE's ribcage tried to shut him up by throwing out a few USB worms which he gobbled up with gusto. The braying thankfully stopped when AhmadineDonkey began to hawk up stuxnet code, then proceeded to vocally reproduce "myrtus, myrtus, myrtus, ..." without control.

Mingling amongst the group ensnared by MORE’s bottomless pit were plenty of other nameless naughty boys in business suits who'd been sucked in from every nation throughout the world. “But I run a business”, they all declared defensively, “if somebody’s buying, I’m selling." Apparently that’s their story and they’re sticking to it.
And then we woke up and realized that when we whittle away at our own foundation, the structure will invariably weaken and the resulting gaps will beg to be filled with MORE.
After all of this we can't help wondering, does the Blue Fairy really have the power to turn those trapped inside the belly of the whale into true human beings?

More knows no bounds in our "Dream Sequence" January 24, 2010 posting "Walled Off".
Posted by In The Rear View Mirror at 6:30 PM No comments: