See the world virtually change before your very eyes with a pair of 3-D glasses and a little alter ego shape shifting. Thrive in 2010. Happy New Year! 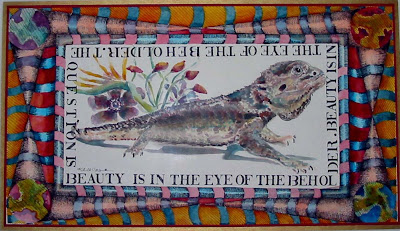 “Beauty Is In The Eye Of The Beholder”. Original watercolor/pen and ink.
© Copyright by Artist, KA Collins. For more information concerning the artwork, contact KA directly at http://www.artistkacollins.net/. (Author Links)

Create your own reality or let Bosch do it for you like he did in our ‘Dream Sequence’ November 29, 2009 posting "The Art of Reality”.
www.InTheRearViewMirror.com
Posted by In The Rear View Mirror at 8:23 PM No comments:

Cashing In On COIN

Right about the time Erik Prince of Blackwater-now-Xe was sagaciously graymailing the U.S. government with an exposé in ‘Vanity Fair’, and Osama Bin Laden was shrewdly recruiting a fresh round of terrorists from American soil, we were furiously working at our laptops hunting the internet for some practical financial advice in a feeble attempt at damage control as the economy continues its slippery downward slope.

Following a trail of click-through links, we inadvertently stumbled upon a website that resembled an online scavenger hunt called “Find the COIN”.

They say the best place to hide something is in plain sight, and “Find the COIN” was clearly counting on it. First glance gave the impression of top secret encrypted access only, yet we were able to navigate the user-friendly site with the ease customary of any other public domain. It took only minutes to discover that the two adversaries pitted against each other in this virtual scavenger hunt were none other than Erik Prince and Osama Bin Laden themselves, using the avatars FLY and CHAMELEON, respectively.

The grand prize was a hunting trip with Dick Cheney while camping with al-Qaeda in the heart of the Swat Valley. Given the scavenger map they had to work with (shown below), it was obvious there could never be a winner. 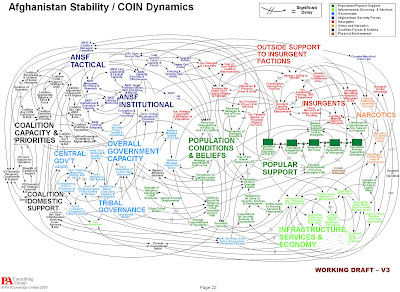 The site permitted us to seamlessly trace their high-tech/low-tech maneuvers across the scavenger hunt’s mapped out terrain where the opponents’ choreographed war dance was being destructively played out on an expansive international stage - all orchestrated to the beat of technology’s rap song.

The CHAMELEON’s right sided domination of the scavenger map looked to be absolute, as did the FLY’s left handed supremacy. It appeared that CHAMELEON’s strategic preference was the aggressive accumulation of powerful modems and the equipment necessary to post YouTube recruiting promos, instruction videos, and the occasional “catch me if you can” taunts to FLY across his Facebook wall.

The FLY, on the other hand, had left a furious trail of ‘snatch and grab’ tweets posting classified coordinates for strategic assassination targets. More interested in acquiring beefier helicopters than potent modems, FLY seemed intent upon fully implementing his 3-F systematic action plan: FIND the target, FIX the target’s routine and FINISH the target off…all directed, of course, at 3-F-ing CHAMELEON.

A glance in the rear view mirror offered us a crystal ball reflection of the land of Oz as the Wicked Witch of the West cast her sleeping spell upon the expansive poppy fields that blanketed the yellow brick road on the way to the Emerald City. Doubtless few would rush to compare the Helmand province of Afghanistan to the land of Oz, yet few will deny that the road leading out of Helmand’s poppy fields is indubitably made of golden bricks. And somewhere over that rainbow is a pot of gold used to fund world chaos and conflict as the masses close their sleepy eyes to the underlying machinations of the true power brokers.

Deep Throat knew what he was talking about when he urged us to follow the money, for the one who controls the money, is believed to control the world because money makes the world go ‘round. A simplified version of doing the math might look something like this: Money = Power = More Money.

Yes, there will always be plenty of money to be made by the robber barons hard at work sparking civil dissention and provisioning war zones by supplying both sides with what they need to keep the sparks flying. Another thing’s for certain too, there’ll always be a need for an evil Boogey Man antagonist to pit the good against.

World domination through cash control is an ageless game. Wouldn’t then a declaration of war against evil be an illusion that simply makes the rich richer and allows us to feel good about it?
Going stealth can be as easy as changing your name. Guidelines for how to go unnoticed can be found in our ‘In The Rear View Mirror’ February 15, 2009 posting "Catching a Few Xe’s".
http://www.intherearviewmirror.com/
Posted by In The Rear View Mirror at 1:12 PM No comments:

Once upon a time
There was the perfect mate.
Society counsels marry,
That means incorporate.
Articles and by-laws
Once duly created,
Form a household compliant,
And lawfully regulated.
Board meets for nuptials recited
As both in agreement converge.
Separate assets become united
In a co-mingled blend ‘n merge.

So before you speak the words “I do”,
You might want to negotiate
The best deal for you.

So before you speak the words “I do”,
You might want to explore
The options available to you.

So before you speak the words “I do”,
You might want to hold in reserve
Something solely for you.

Corporations plan for perpetuity,
Redefining “til death do us part”.
Strategic goal is long term security,
As shown on the pension plan pie chart.
Life cycles forth with its ebb and flow,
Branches form a brand name niche.
Years to lay all those ducks in a row,
Not discounting that seven year itch.
Dissolution optional if shareholders split,
“Happily ever after” seems a fairy tale.
The end of the day finds it difficult to quit
When your business is just too big to fail.

So before you speak the words “I do”,
You might want to ask
Is marriage the right business for you?


Alley Cats traditionally have a little business on the side. Perhaps you'll hear one purring a sales pitch in our ‘Vice Versa Verses’ November 4, 2009 posting "Alley Cats".

Posted by In The Rear View Mirror at 5:29 PM No comments: