Something is rotten in the state of Wisconsin, and it’s not the moldy bleu cheese. Nor is it the lingering stench of unwashed protestors who filled the Capitol building-turned-campground last month. The rottenness in Wisconsin seems instead to be emanating straight out of the governor’s mansion for there’s a new man on the throne and he's busy throwing his sceptre around.
In mid-January, Wisconsin’s newly elected GOP governor and Tea Party favorite, Scott Walker, blindly hit the job post running. Walker wasted no time in outmaneuvering his colleagues before expeditiously stripping his constituents of their collective voice when he ramrodded his “I-owe-the-Koch Brothers” agenda down their throats without so much as a “let’s talk about it like grown-ups”.
Unreceptive to any form of negotiation, Walker made it clear from the start that he wasn’t interested in the opinions of the very people who’d democratically elected him to represent and serve them, even when those voters vehemently jumped up and down in opposition to his rights-stripping legislation. And the fact that Walker’s rights-stripping measure had absolutely no bearing on his campaign promises of fiscal responsibility made his imperialistic approach to the issue all the more dehumanizing.
Apparently the new face of Tea Party democracy has donned the mask of Napoleon Bonaparte, dictator and self-declared Emperor; and one whom many would assert was the antithesis of democracy. 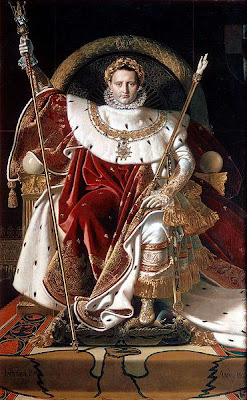 Maybe Walker simply forgot who was paying him to be their governor, but we hardly think so. As soon as Walker removed his taxpaying population from the equation in one fell swoop of his governor’s sceptre, it became quite clear that the man hadn’t forgotten who pays him at all - especially when we follow the flow of money along his campaign trail.
Walker has ultimately shown the state of Wisconsin -and the entire nation for that matter- what Harry S. Truman really meant when he said “the buck stops here”. In fact, all indicators are that Walker is vigorously keeping his Tea Party promises of fiscal responsibility even now. Unfortunately for the citizens of Wisconsin, that sense of fiscal responsibility has little to do with them, and everything to do with serving the needs, wants and desires of his financial backers.
To be honest, or not to be honest... ...or is that just a stupid question, because Napoleon was of the opinion that “the surest way to remain poor is to be an honest man”. And while Napoleon also believed that stupidity wasn't a handicap in politics, everyone knows that no one goes into politics to go poor.
What is most disconcerting about Walker’s actions thus far is that no one can really be sure whether his unyielding position is merely the result of a righteous need to champion the cave-man cause of Reaganomics no matter the cost; or if he’s been lethally infected with a new strain of the fungus-amungus called the “Koch Bros spores”, which would irreversibly turn his empty shell of a body into an American variation of the Zombie Ants of Brazil, and a spore-spreading minion of the Koch Brothers.
A quick glance in the rear view mirror at ’s election campaign contributors shows us just how persuasive a cup of tea steeped in 43,000 spores can be. Evidently the more spores he slurped up, the faster he rose and the stronger he believed himself to be.
Frankly, it would be naïve to think that power didn’t come at a price, but with great power also comes great responsibility. Some would call that walking the line, which seems to be a notion very unfamiliar to Walker.
Now that the damage has been done, what we'd like to know is who keeps feeding the fungus-amungus and how is it that the "Koch Bros spores" continue to thrive? Isn't there a way for voters to starve the fungus out?
Bribe politicians and legislate the terms = Control the money and rule the world. See what we had to say about it two years ago at ‘In The Rear View Mirror’ posting "Greed Goes Underground".
Posted by In The Rear View Mirror at 8:08 PM 2 comments: