T.S.A.: It’s Our Business To Touch Yours

The Thanksgiving season has arrived, and with the holiday season comes the opportunity for many of us to slow down long enough to look back in the rear view mirror and reminisce with our loved ones about the cornucopian days of old, while giving thanks for barely surviving year 2010 of the Great Depression.﻿
As we watch the price of gas and travel predictably increase in the weeks leading up to every holiday season, we’ve come to understand that the Wednesday before Thanksgiving is to the travel industry what the Friday after Thanksgiving is to the retail business - namely, the busiest day of the year.

This year is no exception, yet it seems we have last year's underwear bomber to thank for this year's viral travel advisories warning all flyers that airport security has gone "hands-on".

All of the recent brouhaha about passengers being subjected to invasive body searches in exchange for the privilege of boarding a plane with an expensive ticket bought and paid for has us convinced that many travelers will simply explore alternative ways of getting where they want to go with dignity intact.

Considering the hardline screening options flyers have to choose from these days, we can hardly be surprised by the thousands of formal complaints that have already been filed by indignant travelers who believe their rights and bodily temples have been violated.

It doesn't seem to matter whether you choose the Rapiscan radioactive see-you-naked photo op, or opt for the personal touch with a full-body fondling that has been specially designed to intimately search every type of physique - such as "The Gentlemen's Junket" which includes the old “ball and taint lift 'n shift”, or the "For Ladies Only" inspection featuring the "camel toe us apart and 'are they real?' breast test".

Whatever screening option you choose (and some lucky passengers may even get to have both), you'll be able to board that airplane with a false sense of security, and of course, the "T.S.A. Approved" inspection stamp conspicuously branded on your hindquarters. 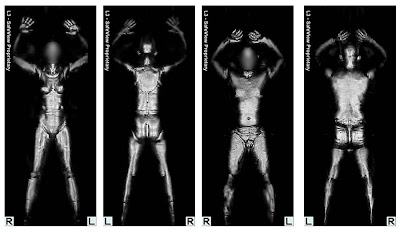 In its arrogance, the T.S.A. has clearly failed in the customer relations department. Perhaps the T.S.A. didn’t think it necessary to provide the population that pays for its existence any kind of advanced preparation, let alone a touch of pavlovian reinforcement through a basic T.S.A. P.S.A. propaganda campaign devised to soothe what they should’ve anticipated: citizen concerns about rights violations, health risks, and the protection of children who have been taught to never let strangers touch them.

After numerous internet postings went viral, giving viewers access to live and uncensored footage that had been recorded at airport sausage factories across the land by average travelers, potential passengers got to see firsthand what to really expect when they step into a T.S.A. security screening line this holiday season. The T.S.A. has since been forced to play defense and do the damage control dance. It ain’t pretty, and it may be their un-doing.

Few should be surprised when we begin to see the more customer-oriented, passenger-friendly travel alternatives experience a significant increase in revenue, right about the time the commercial airlines get hit with substantial financial losses once again as they stand on the sidelines and complacently permit the T.S.A. to man-handle their paying passengers, pilots, and flight crews.

The most sickening part of this drama being played out on “security theater” (courtesy of Jeffrey Goldberg) is that everyone knows, even the T.S.A., that the terrorists are way ahead of current policies and procedures. Terrorism has already been found packing its explosive junk all the way up its back trunk where no one can find it without a body cavity search, not even the Rape-i-Scan.
Capitalism may not save us but it does have a tendency to one-up terrorism, for with capitalism comes creative innovation used to create cash flow not martyrs, and just in time for the holiday gift giving season.

There probably isn't one guy on your gift list who wouldn't love hearing this every time he gets a phone call (courtesy of John Tyner): “if you touch my junk, I’m gonna have you arrested!”. And if his ‘junk’ is extra special, you might even consider giving your favorite business traveler a pair of radiation briefs with an x-ray blocking fig leaf shield.

Before we know it, those see-you-naked full body scans they say are never stored on a hard drive will be put to good use with the launch of a few trendy websites that’ll make celebrity sex videos seem passe'.
So it looks like this year will see us celebrating close to home, where we’ll be busy giving a special thanks for the fact that we couldn’t afford to fly anywhere anyway, even if we were in the mood to get felt up by strangers. Not this year, honey, we have a headache.