We had a dream……and in that dream we took our need to know to a new level when we initiated a Google internet search on the subject of ‘CHINA’. Given the recent rumblings relative to China’s economic seduction of the international investor heavyweights, it seemed a little prudence and due diligence might be in order before taking our currency on a cruise up the ¥angtze River with the big boys. 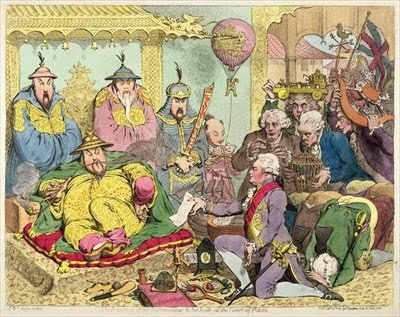 Accustomed to receiving an uninhibited flow of information at the speed of now, we were predictably confounded when our Google search yielded nothing but a blank white page. And no matter how many times we hit the ‘refresh’ button and blinked our eyes in disbelief, it was undeniable - a blank page was all we were going to get.

.
What we already knew (without the benefit of a Google search) was that the world at large has long considered the Great Wall of China to be one of the wonders of the world, yet our dreamtime search results drove us straight into what many are now calling the Great Firewall of China. Erected upon an onerous and non-negotiable platform of cyberspace censorship, evidently this Great Firewall is so towering that China’s own Olympic hurdle jumper, Liu Xiang, isn't even able to make the great leap forward and over the top.

For centuries the old proverb “knowledge is power” has historically encouraged those in the know to wisely acquire (and share) vast knowledge with the promise of power as a dangled payoff. While this belief system may still prove viable, or perhaps produce the necessary credentials for some spheres of influence, the 21st century adaptation of this old philosophy seems to be more akin to “money is power”.
So as we sit back and watch China overtake Japan as the world’s 2nd biggest economy, we can only remind ourselves that information imperialism not only owns our debt, but someone has to keep Wal-Mart in business.

We couldn’t sit back and watch for long, however, because something was rotten in the state of our world close to home. And the stench was so foul, even pinching our nostrils shut proved futile against the pungent sulfuric fumes that reeked of rotten eggs and threatened to overtake us. Frankly we weren’t sure what smelled worse - the corrosive gases seeping from the toxic drywall lining the walls of our home, or the doggie doo in the backyard laced with remnants of the plastic fillers that had been covertly baked into the dog’s food.

As if the assault on our nose wasn’t bad enough, this dream-now-nightmare directed our eyes to the innumerable infants who were innocently consuming formula mixed from tainted milk powder while snuggled warmly in their highly flammable jumpers. Then on to the toddlers and children who were adorned in dainty jewelry cast out of cadmium while playing in a trance on the floor with toys painted in the vibrant colors only a lead palette can produce. The colors of those toys were almost as brilliant as the countless tubes of lipstick and eye shadow compacts we saw filling bathroom drawers everywhere.

We briefly considered taking a couple of Tylenols for the headache we'd gotten from the toxic drywall fumes, but figured it too was probably made in China.

And then we woke up with a headache and wondered if Confucius ever said, “Don’t be evil”.
As China continues to shroud its Great Wall in smoke and mirrors while agressively maximizing short term profits with cheap knock offs and actions that harm humanity and kill healthy competition, we are wont to ask who’s keeping it in busness?