2009’s last call had us optimistically humming Auld Lang Syne right along with the other merrymakers who also couldn’t afford to attend Tavern on the Green’s last supper. When the clock chimed in at midnight, we briskly donned our 3-D glasses looking for an exclusive preview of the year 2010 from the land of the beautiful people.

Those first impressions overpowered our senses with panoramic images so vibrant and aesthetically alluring, we were momentarily convinced that perfection was attainable. Although the sweeping images were specifically designed to entice on the surface, we realized upon second glance that they were in fact highly flawed, for they were either flush with gaping holes formerly plumped up with body parts, or sprouting extra parts like Lakshmi with add-ons.

Nothing was as it seemed, and evidently nothing can make the unattainable attainable faster than the magic wand of photoshop.

Peering in the rear view mirror allowed us to reflect upon a time when skilled artisans offered up credible representations of life in the real world. Whether these representations were designed with fabric to be worn as fashion, or masterfully painted on canvas as a depiction of emerging social modulations, or memorialized through the lens of a camera; the imagery was authentic and the camera never lied.

In the process of immortalizing the life and times around them, artistic historians have oftentimes been called visionary, even ahead of their time. And while Salvador Dali may’ve been considered ahead of his time during the 1930’s, we’re pretty sure he never expected one modern day interpretation of his “Soft Construction with Boiled Beans (Premonition of Civil War)” to include the place where body parts become art after they’ve been photoshop cropped in the hasty pursuit of manipulated perfection. 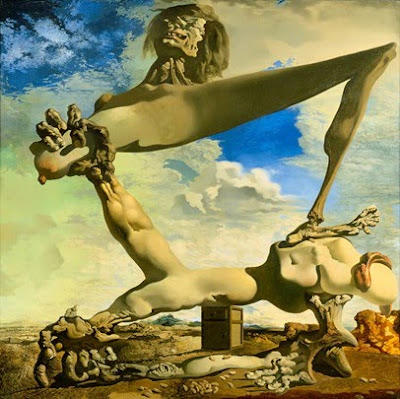 Civilization overall has gleaned innumerable advantages from the technological advancements of the last decade, and nothing quenches the inherent human need for instant gratification faster than output with a keystroke. Unfortunately something is lost in this pursuit of instant outcome, and the experienced would call it quality.

There are those who maintain “life is a journey, not a destination”. This philosophical expression seems to suggest that life’s greatest value is realized through an accumulation of experiences that stimulate internal growth and development, and not in the concluding moments at final breath. The scientific community apparently concurs with a comparable axiom of its own in “the joy of physics isn’t in the results, but in the search itself”.

We call this process vs. product, or perhaps just another way to extol the virtues of learning long division.

Today’s technology has made readily available the tools necessary to efficiently manipulate our external mask to conform in a click with the fickle and fleeting version of what is considered desirable in the eyes of advertisers. Whether it be unrealistic or physically unattainable is irrelevant because within a smartphone lies the power to virtually redefine reality and create an alternate world of our own design that is inhabited by fantastic representations of our alter ego.

Yet no matter how much we virtually alter our reality, certain truths remain self evident, namely "where ever you go, there you are".

As instant product output continues to override the patient investment true quality demands, can it be that quality too is in the process of being virtually redefined?

Posted by In The Rear View Mirror at 3:36 PM