We had a dream……and in that dream we found ourselves standing in the middle of a vast Texas wasteland next to a large cluster of sagebrush that was still dripping from the recent rain storm. The cracked earth that had previously lined the nearby creek bed was now engorged as the rain waters rushed by in a hurry to fill the scrubby pond down yonder.

That was where we first saw Jed-Dubya hunkered down with his locked and loaded rifle, fully poised to pick off the croaking frogs just as fast as they could leap out of the flooding pond.
It looked as if Jed-Dubya’s short attention span was about to accidentally be the making of him, for our dream then showed him getting easily distracted by an unidentified shiny object across the pond, and his first reaction, of course, was to shoot at it. He missed, but hit pay dirt for up from the ground came a bubbling crude. Oil, that is. Black gold. Time to throw a Texas Tea Party.
With the help of one Mr. Drysdale of the Red Shield Bank, Jed-Dubya eventually got around to selling his new oil field to the president of the OK Oil Company, Mr. Dick. Mr. Dick had always considered himself to be the biggest fish in a little pond, and rarely failed to stand a bit taller when afforded the opportunity to introduce himself to big clients with his favorite nickname ‘Moby’.
Dubya naturally saw no need to jump into the middle of the funding fetch with Moby Dick when all the price beatin’ could be left in the robust hands of his nephew JethRush. Heck, before Jed could whittle a whale out of a piece of driftwood, JethRush had strong-armed a deal that saw Moby Dick’s right forearm smacked down on the table backward after JethRush had arm rassled it flat like a carnie at the county fair. This is what the kinfolks call “doin’ business on a handshake”.

During the weeks that passed between shootin' and sellin', Dubya’s velvety oil spewed from the earth unchecked, and the waters of that scrubby pond turned black and toxic with crude oil. Any frog that had been lucky enough to survive Jed’s shooting party was now thickly coated in heavy crude and washed up along the shoreline never to hop again.


Now Jed’s ole Granny Armstrong was a rootin’ tootin’ Texan to the core, and she’d taken an unusual liking to OK Oil’s Moby Dick. Granny Armstrong offered Mr. Dick a rare invitation to do some big game huntin’ on the ranch before it was all packed up. Good thing Granny was an M.D. too cuz it sure came in handy when Moby Dick unwittingly took a pot shot at the Texas law man who’d only joined the hunt to flush out Jed's baby girl and the county’s hottest looker, Elly May Palin, from behind the bushes where she was busy winkin' at all them critters running for their lives. 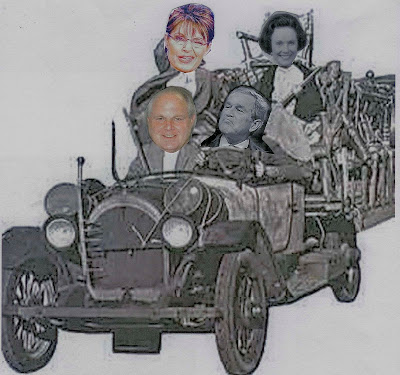 As soon as Jed-Dubya had securely deposited his copious bounty in the Red Shield Bank, it was time to load up the truck and move to Washington D.C. Thanks once more to the tacit manipulation of Mr. Drysdale, Jed-Dubya was able to buy up the biggest White House that Pennsylvania Avenue had to offer. When the seller couldn’t afford to pay its underwater mortgage to China, let alone the back taxes, it was without a doubt the best deal the new century had to offer.

Dubya was thrilled. He had the whittling porch of his dreams. But poor Granny Armstrong. She just wasn’t sure what to do about that huge steeple facing the long cement pond that was taking up too much space on her green grassroots backyard so richly enhanced with astroturf.

As far as Moby Dick was concerned, JethRush had found his calling. Whenever Mr. Dick would throw one of those regular White House Tea Parties he was wont to have for our friendly neighborhood OPEC drillers, the party would invariably conclude in the parlor with a little JethRush price fixin' ‘handshake’. And every once in a while, M. D. would even secretly arrange for JethRush to do some pharma-rassling with his good buddies over at the OxyContin dispensary, just because he could. No pain, no gain.

JethRush’s kissin’ cuzin, Elly May, had her own common sense solution for growing Pa’s oil empire, and family values would firmly govern her grand plan which was steamrolling forward nicely under the rally cry, “Drill, baby, drill!”. Elly May couldn’t wait to grab her Uzi and jump on board the Exxon Valdez for a tanker cruise along the pipeline to Alaska. What she didn’t expect to see on the expedition were all of those trees. A tree’s a tree. How many more do you need to look at? Oh - oh - oh!! Maybe the family should think about expanding into the lumber business. **wink*~*wink**

And then we woke up and realized that even when the body appears to be running around without a head, it always seems to get where it’s headed. We can only wonder now where the Tea Party is headed next.
Y'all come back for tea now, ya hear?

Yabba, dabba, D.C. Take your shoes off and let the dirt gather under your toenails in our Stone Age ‘Dream Sequence’ November 14, 2008 posting “Washingstone B.C.”
Posted by In The Rear View Mirror at 1:00 PM