That annual day of love affectionately known half the world over as Valentine’s Day saw the other half of the globe celebrating the Lunar New Year as it ushered in the "Year of the Tiger" with hopes of good fortune. All of this luck in love hoopla gave us pause to wonder what lovers and tigers could possibly have in common.
It’s said that the Year of the Iron Tiger (or is that the “9-Iron Tiger”?) will keep away the three main tragedies of any household, and we can only surmise those averted tragedies would include something like NOT:
1) carelessly driving the family SUV into a tree at the end of the driveway in the wee hours of Thanksgiving night;
2) discovering extracurricular texts and phone calls from strange women on your husband’s cell phone; and
3) being forced to fend off a paparazzi feeding frenzy. 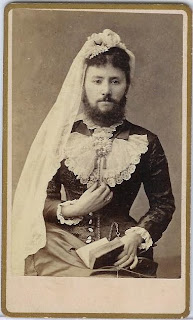 In with the Tiger also comes the superstitious belief that the year won’t be a good one for getting married. No one probably knows this better than the Arab ambassador who was treated to a cross-eyed view of marriage on his wedding day in Cairo a couple of weeks ago. We assume the bearded bride didn’t marry a hairless man, and there was obviously only room for one beard in that household. After Mr. Ambassador cried foul and obtained a hasty annulment, all we could see in the rear view mirror was burning rubber when he hotfooted out of town with no booty in the back.
Mr. Ambassador’s desire to have it both ways evidently backfired when the truth was unveiled, much to his (very public) humiliation. The discarded wife, however, incontestably landed on her feet financially thanks to his $136,000 endowment. Perhaps the Lunar New Year should’ve been called the Year of the Tigress instead.

The anthropology deeply nestled within the species homo sapien has proven itself to be hard wired into the most basic male-female interchange. Few would argue that the human male tends to gravitate towards visually attractive women who can reproduce, just as the female tends to gravitate towards strong men who can provide and protect. While the delicate balance of power between the genders has been historically lopsided in favor of the dominant male, it appears the pendulum has begun to swing in the direction of the educated female.
And it looks as if this shift is about to give new meaning to the phrase “double standard”.

As the economic advantages once commanded by men continues to decline in favor of breadwinning women, traditional roles have logically begun to alter as well. Yet somewhere within this shift in financial power percolates a healthy opportunity to incorporate these evolving standards and redefine the contributions each partner is expected to make to the partnership.

Replacing some of that old anthropological hard wiring has undeniably shown itself to be a challenge for today’s men and women as they both struggle to find a new normal in contemporary society. How then will the institution of marriage ultimately be redefined, and will it stand the test of time?
Why buy the cow when you can milk it for free? ‘Vice Versa Verses’ December 8, 2009 posting "Wedded Biz”.
Posted by In The Rear View Mirror at 4:04 PM